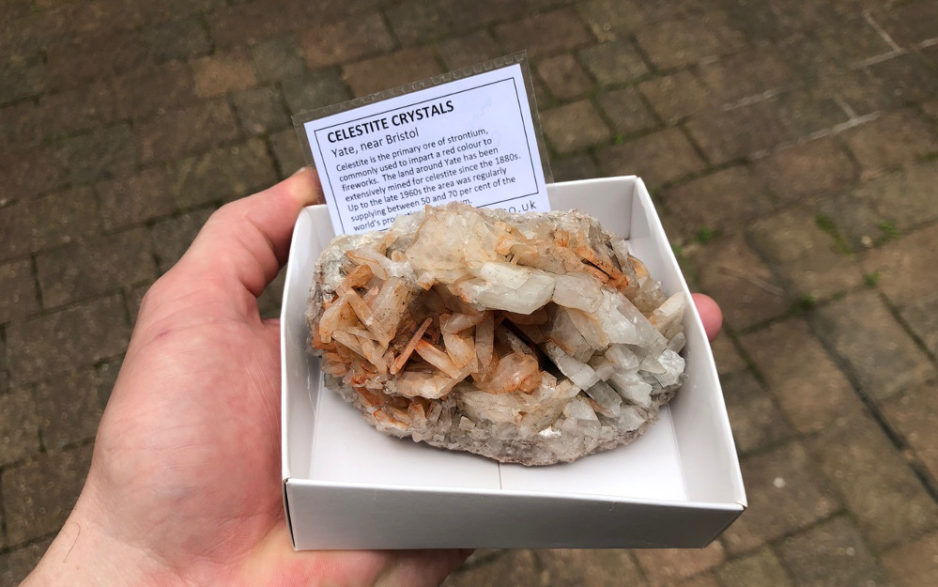 Contemporary designer and maker Phil Cuttance was appointed in August 2021 to develop a new series of permanent site specific public artworks exploring the area’s history of celestine quarrying. Celestine is a mineral that in the past was used in the production of flares, fireworks and even talcum powder and toothpaste. Yate developed significantly during the 20th century as a centre of manufacturing and by 1960 Yate was the biggest producer of celestine in the world. The site of the new development where the artworks will be located was once a location for celestine mining. Phil is currently in a phase of research and development which will include a series of free participatory workshops for local residents. Concept designs for the artworks are expected to be complete by the end of 2021, with construction and installation as the development progresses.

The development Ladden Garden Village occupies 100 hectares of former farmland between the town’s outer suburbs and the more rural aspect at Yate Rocks to the east and Tanhouse Lane to the north. The development will result in up to 2,450 new homes, a new Community Centre and local centre with retail, a new primary school, care home and employment space. It will establish new pedestrian and cycling routes and bridleways across the site, significant new public realm and open spaces including new play areas. The development is due for completion by 2030.

These creative projects enable commissioned artists to explore the physical landscape and heritage of the area and support development of the creative infrastructure within the town. Key aims of the programme are to ensure that the approach supports best practice in public realm commissioning, and prioritises quality and innovation.

Suzanne was appointed by the project landscape architects LDA Design as their art consultant, to research and write the Public Art Plan setting out how this arts programme will be delivered, on behalf of Heron Land. Barratt Homes are now delivering the development and Suzanne is overseeing project delivery on their behalf.

About the artist
Phil Cuttance is a designer and maker originally from New Zealand. His cast sculptural and functional objects in casting materials such as Jesmonite, as well as other casting mediums, have complex forms and sharp lines meaning it is sometimes assumed they have been made using CAD software, CNC machine or 3D printing, when in fact they are all handmade. Phil established his London studio in 2009 and works between London and Auckland making artwork and running casting workshops. His work to date has included large scale sculptures, cabinets, tables and planters as well as vases, trays and bowls. Phil has produced performance-based making demonstrations at Milan Furniture Fair in 2016, Art Basel Miami in 2012 and Cheongju Craft Biennale in 2015. His research-based projects have been recognised internationally, with highlights including a nomination for Design Museum London’s Designs of the Year and a residency at The Barbican in London. He has recently developed a rotational casting technique which will allow him to cast larger and more visually complex objects using a large casting ‘machine’. He plans to set this machine up and create objects ‘live’ where the public can see not only the finished object but the whole process. Past clients include designer Paul Smith and the UK High Commission in Seoul, Korea. Phil’s future projects include international Artist residencies, and an online workshop with Domestika, the world’s largest workshop platform. Follow Phil on Instagram @philcuttance