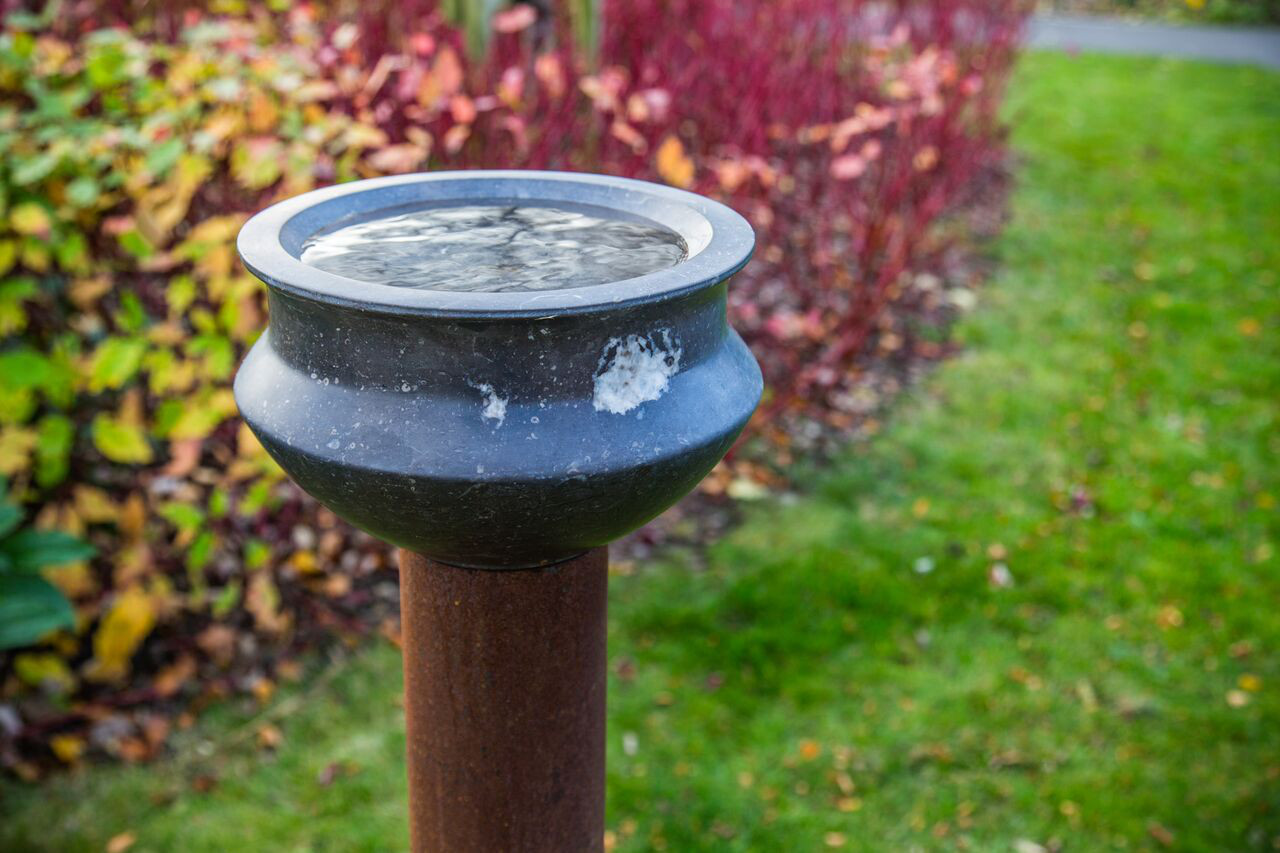 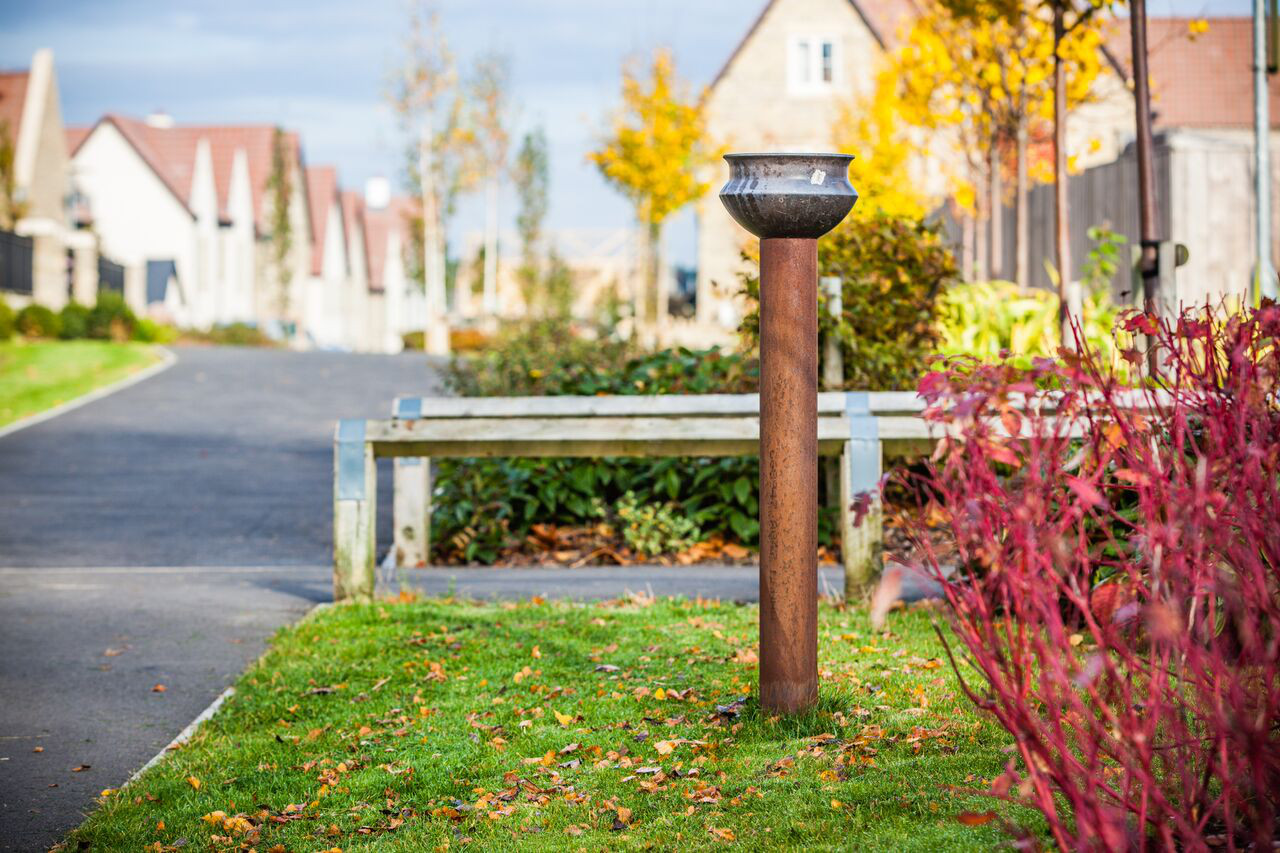 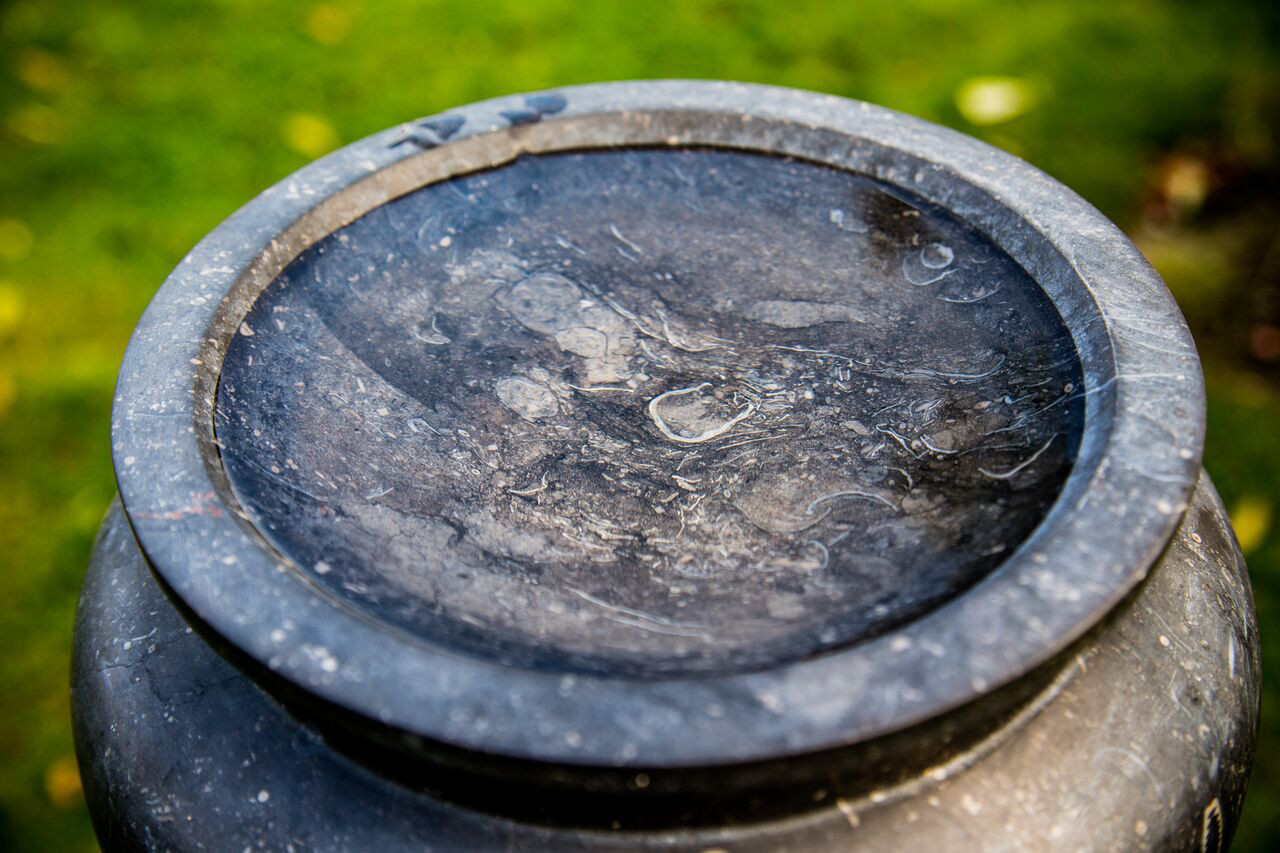 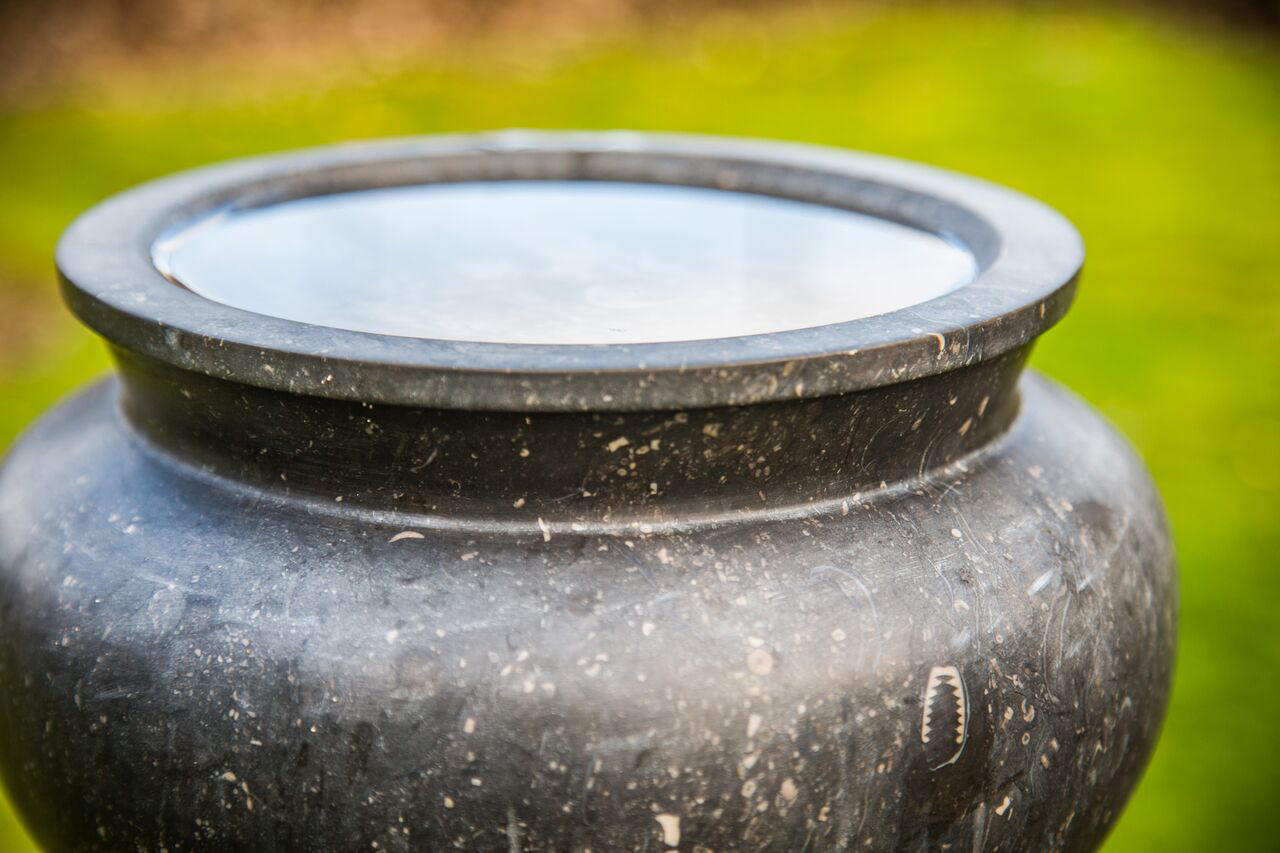 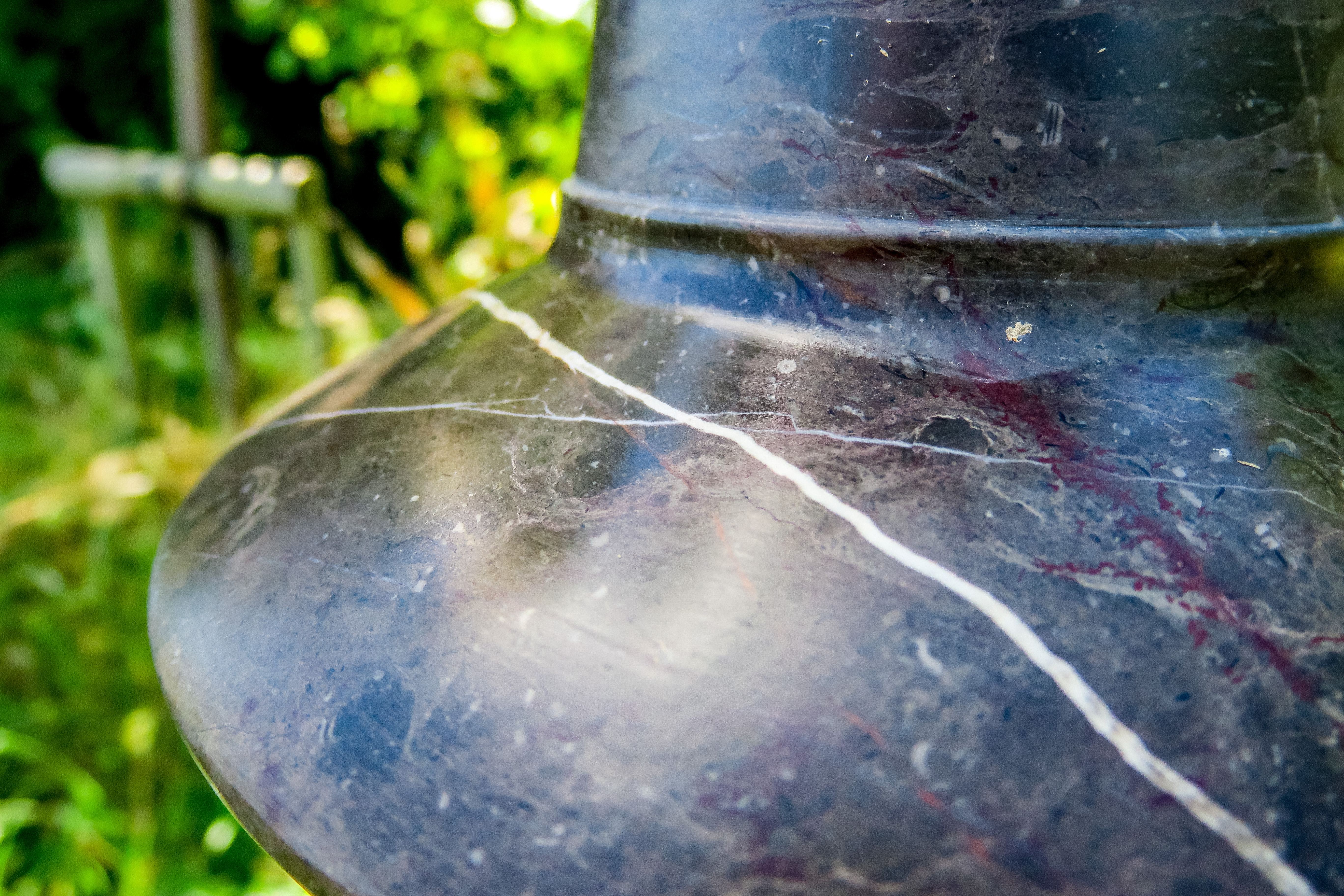 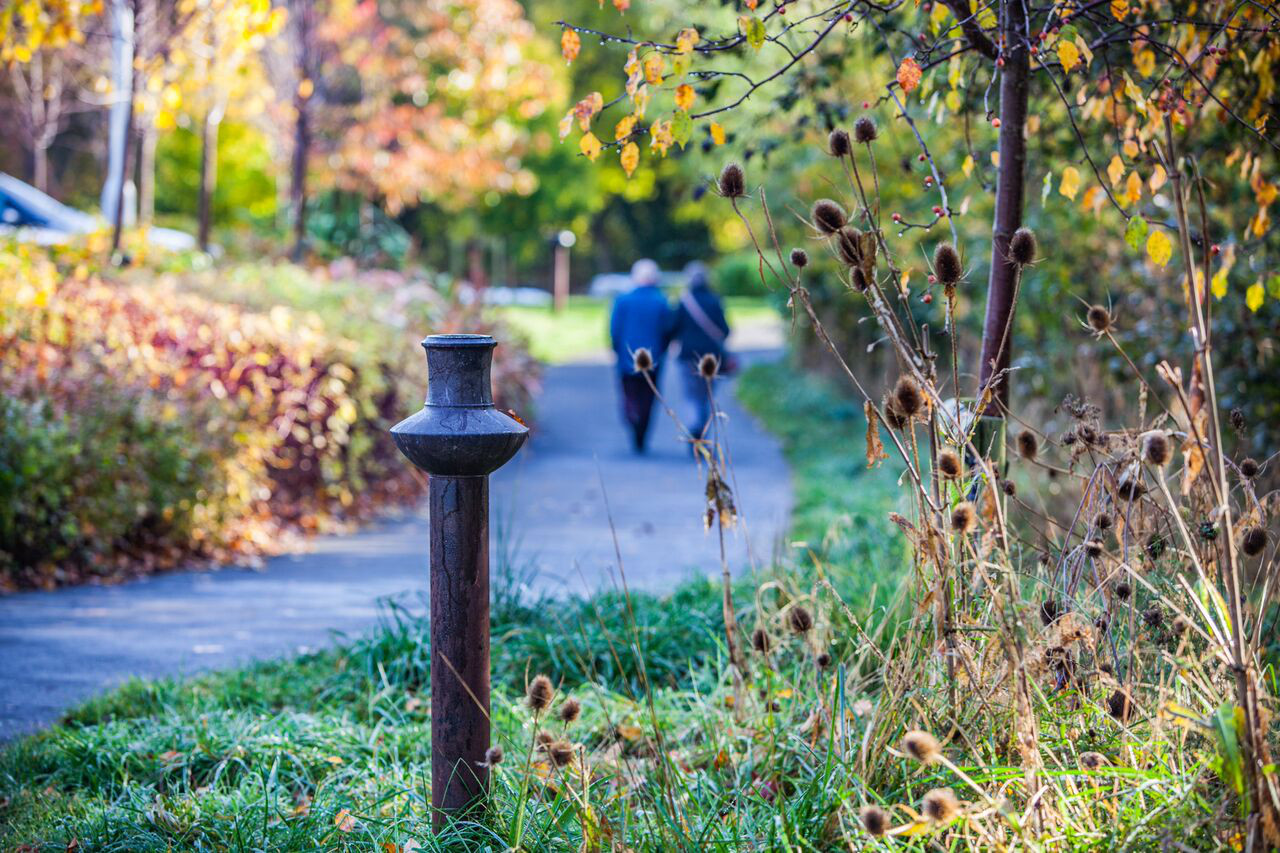 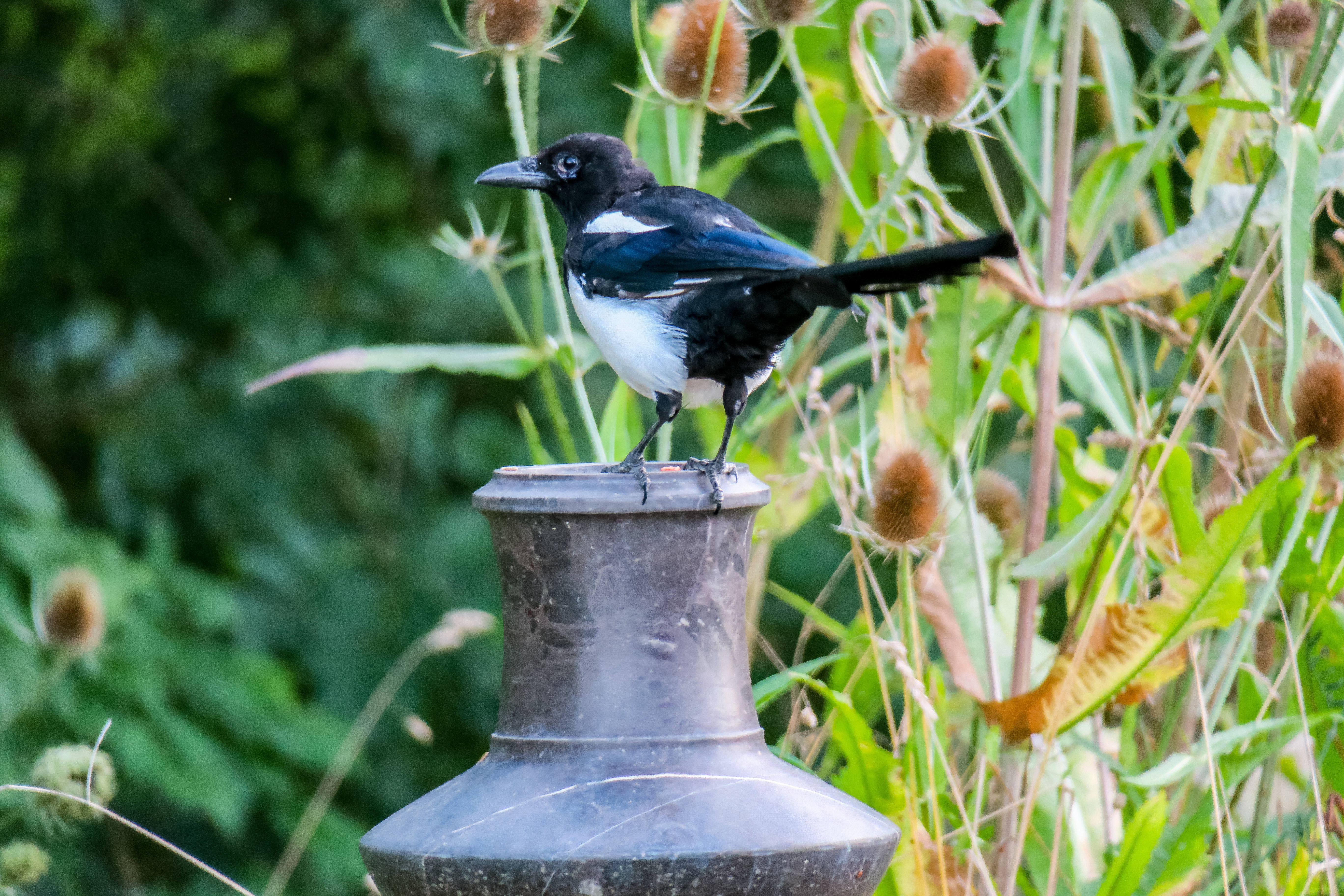 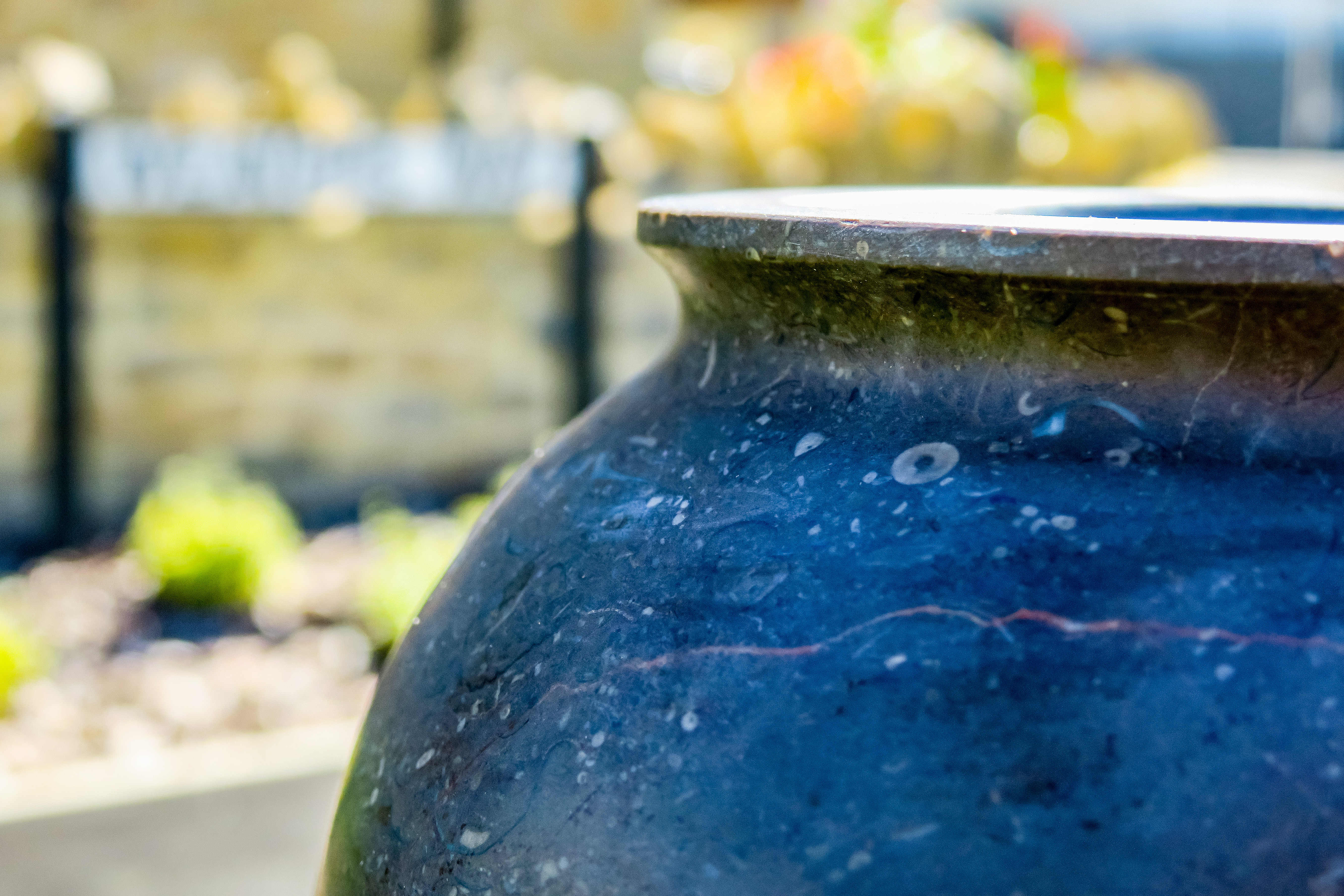 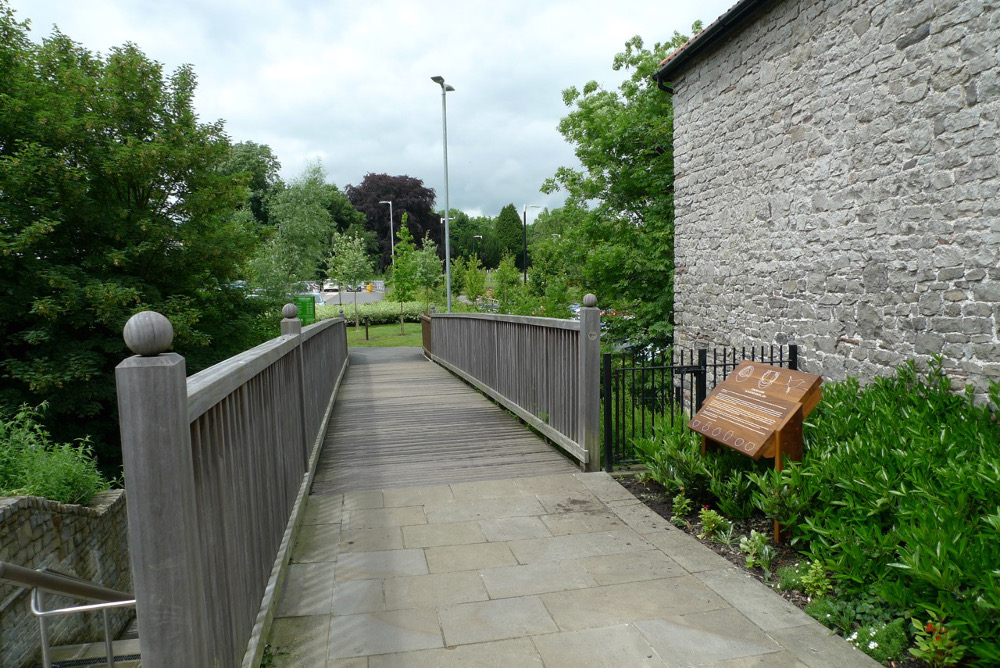 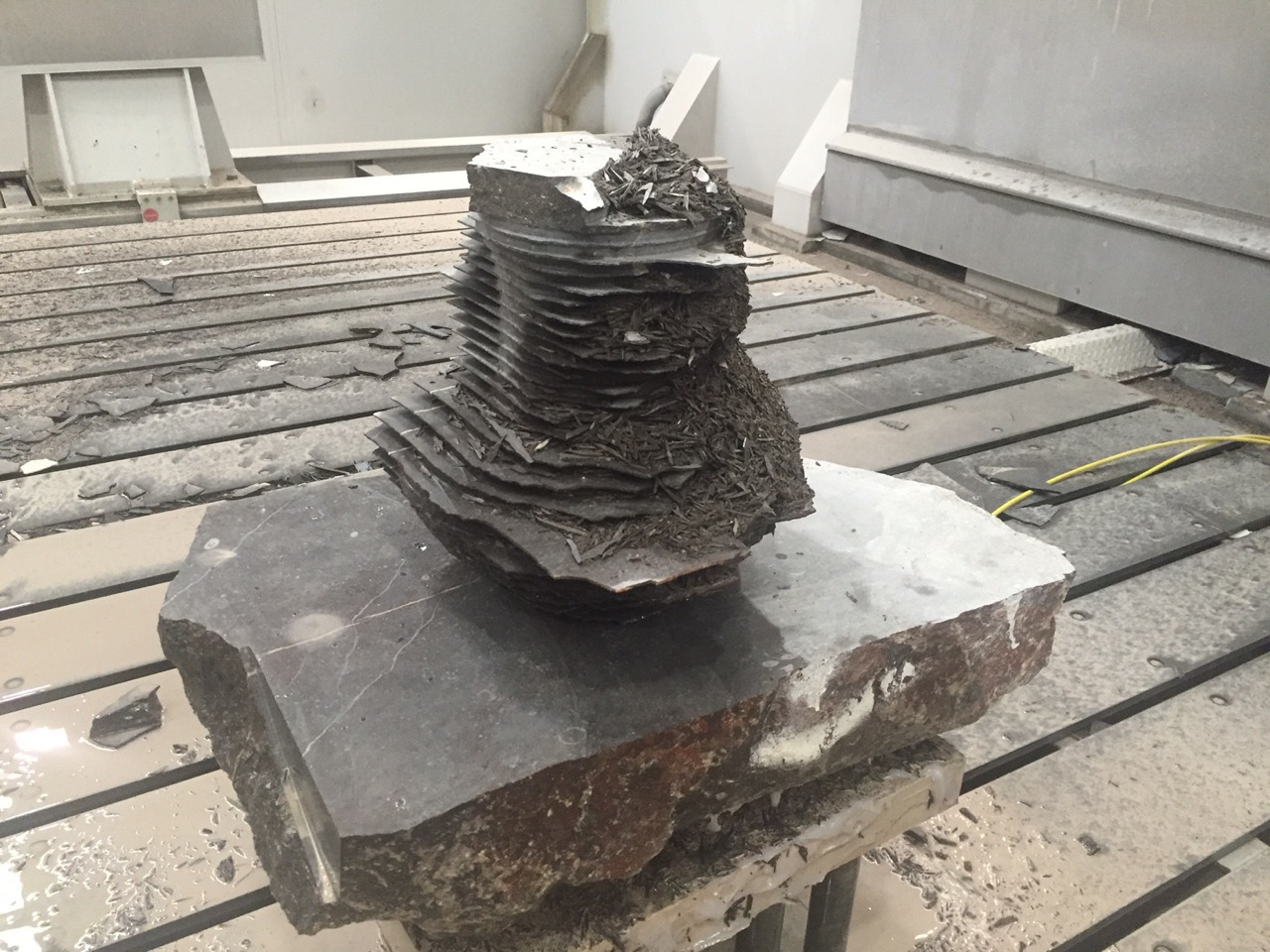 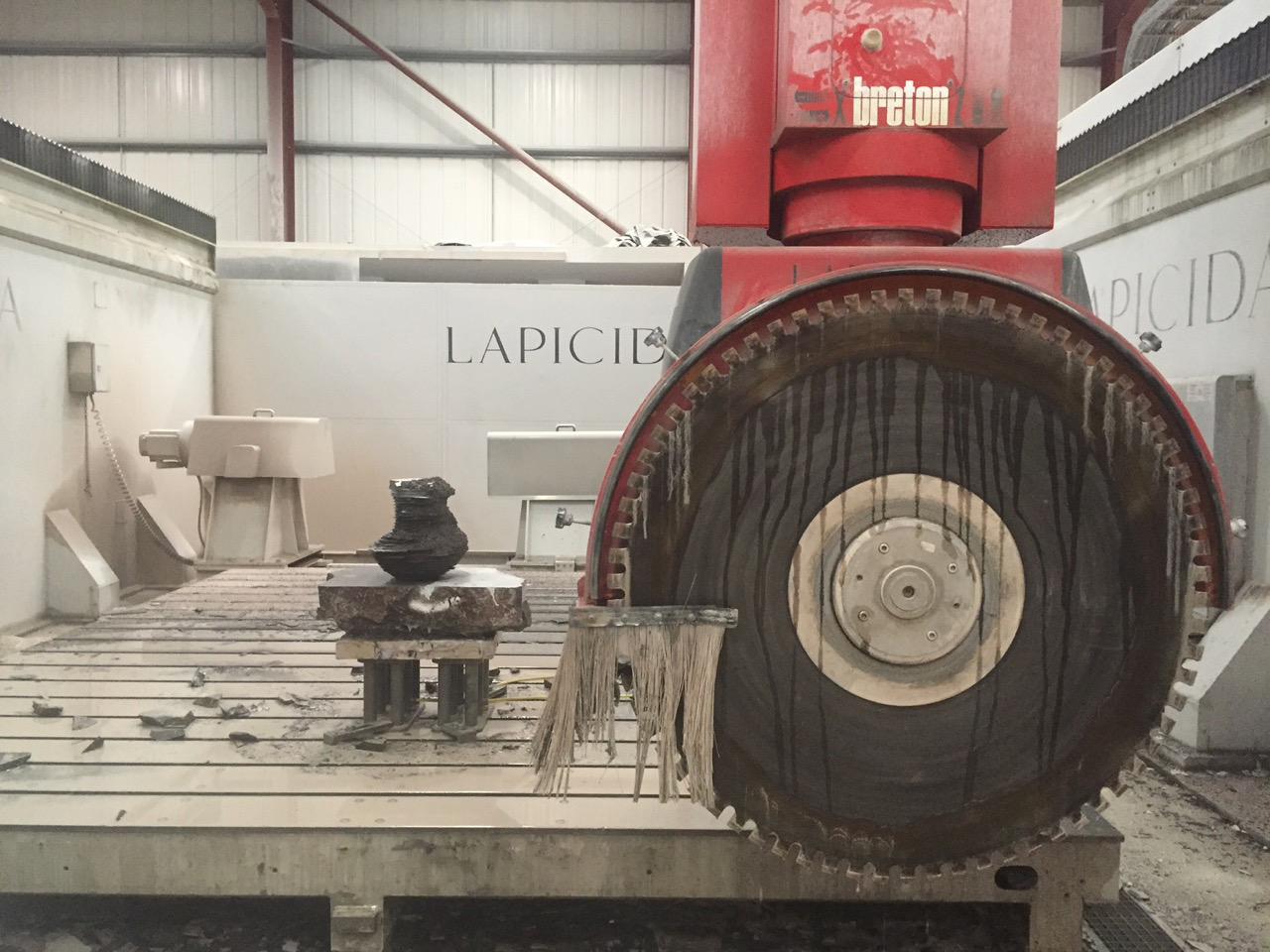 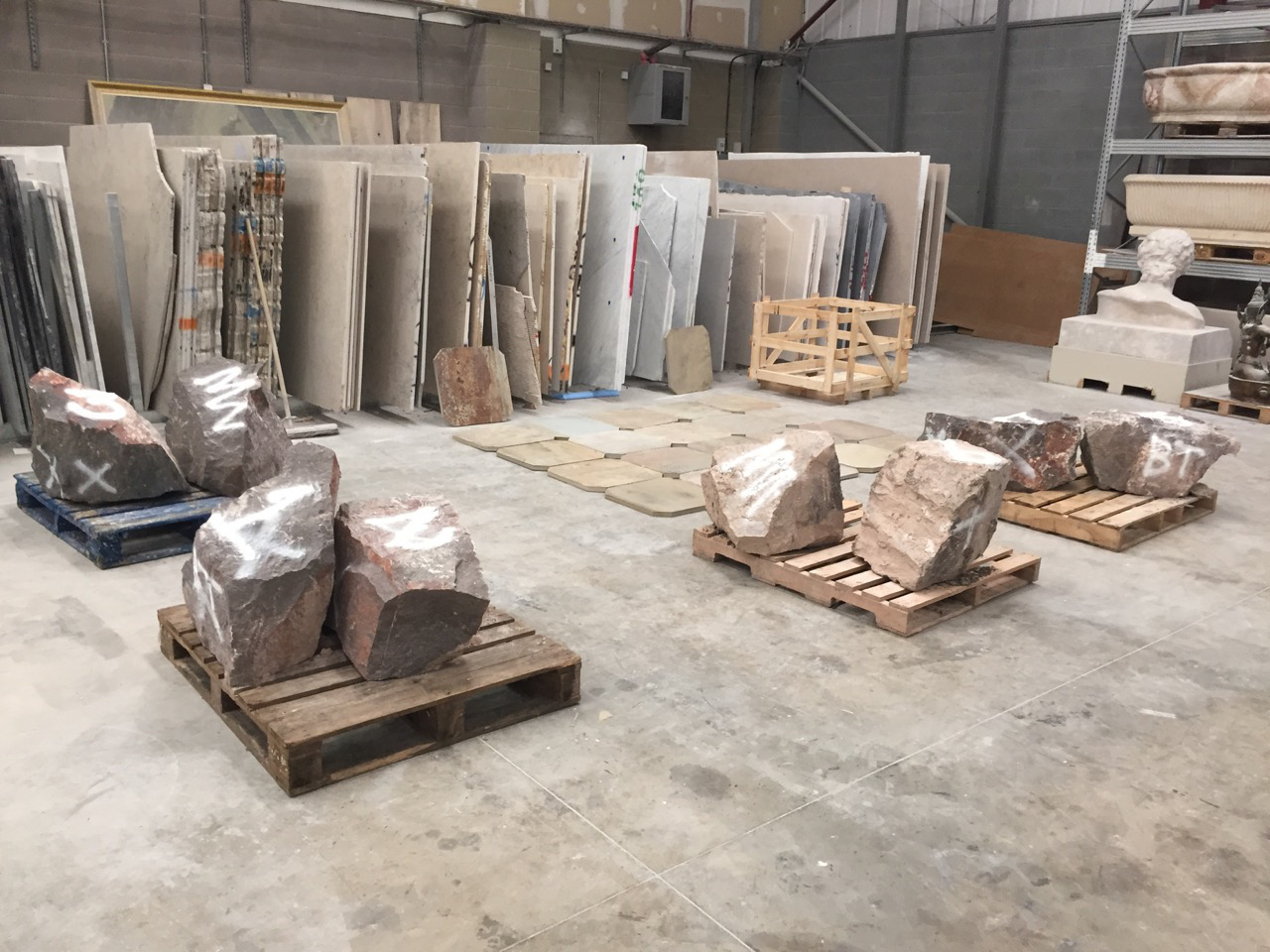 Artist Alastair Mackie (b.1977) was appointed by South Gloucestershire Council in May 2015 to develop a series of functional, interactive public artworks for a green pedestrian route between the high street and a new development of 180 homes at Barnhill, a former quarry in Chipping Sodbury.

Barnhill is a designated Site of Special Scientific Interest (SSSI) because of its geology, and the brief was to create a series of bird feeders or bird baths that would relate to the history of the area, visually linking the new developments together and connecting them to the high street. The project continues the theme of encouraging biodiversity established by the nearby Waitrose development that included the planting of fruit trees and wild flowers, and the establishment of a community beehive.

The six resulting sculptural vessels by Alastair Mackie are made from polished carboniferous limestone sourced from Chipping Sodbury Quarry, close to the development site. This limestone has been used for many local buildings including the church, but originally formed from a tropical seabed 350 million years ago. It contains calcareous skeletons and shells of forms of ancient sea life; examples of these are clearly visible within the natural stone of the artworks. Geologist Andrew Mathieson advised the artist during the project research and design phase and also led a public walk to show people examples of the local geology.

The forms of the artworks draw on the shape of historic vessels from around the world, with each vessel being a representational form for one of the six populated geological continents of the Earth. The shapes are based on relics found by the artist in the British Museum and are suggestive of containment or offering.

The limestone vessels were made in Yorkshire using a state-of-the-art process of three dimensional modelling and robotic milling, and are mounted on Corten steel poles, a material that will naturally weather over time.

The first four artworks were installed in June 2016, with two further artworks due to go in when the housing development nears completion. The RSPB advised the artist upon his designs and made bird feeders at a family-friendly public launch event for the artwork in October 2016.

Alastair Mackie’s work explores and challenges the deep-rooted separation between animals and humans, human inter-relationships with time and place and the transformational processes of materials over time. He has exhibited nationally and internationally, and has worked on a number of public commissions including Mimetes Anon, commissioned by the Contemporary Art Society for the Economist Plaza in St.James’ London in 2009. Alastair lives and works in Cornwall.

One of Alastair Mackie’s earlier works commissioned by Fermynwoods Contemporary elevated two traditional dovecotes from the human dominion, up into the sky – to that of the birds. It was initially a temporary work at Barnwell Park in Northamptonshire but has remained in situ to date since 2013.

Suzanne’s role (working on behalf of Ginkgo Projects and with client South Gloucestershire Council and Chipping Sodbury Town Council) was to oversee the project from project development to installation.